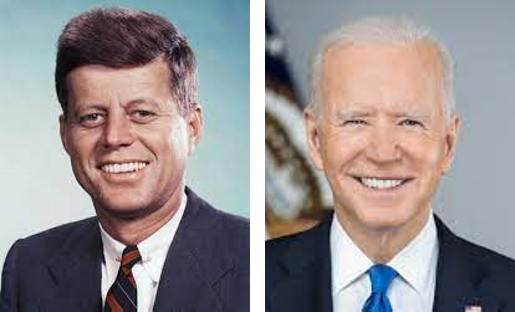 “Climate change is the number one issue facing humanity. It is the existential threat to humanity. Unchecked, it is going to actually bake this planet. This is not hyperbole. It’s real. And we have a moral obligation. But I just think it’s a gigantic opportunity, a gigantic opportunity to create really good jobs. No one is going to build another oil or gas-fired electric plant. They’re going to build one that is fired by renewable energy.”

On May 25, 1961, President John F. Kennedy announced “Moon Shot,” a goal of sending a man to the moon and returning safely to the earth by the end of the decade. Fears of Soviet space dominance and a desire to curb communist influence drove Kennedy to invest in NASA and declare a bold goal that many thought unachievable. It required ingenuity, innovation, investment, and an integrated and intrepid approach! Yet a young President captured the imagination of a nation and set us on a path to unparalleled engineering and scientific achievements.

Six decades later, on April 22, 2021, President Joe Biden announced “Earth Shot,” a goal of cutting Greenhouse Gases (GHG) in half by 2030. He called climate change an “existential threat to humanity” and the imperative to fight climate change a “moral obligation.” He termed the fight against climate change a “gigantic opportunity to create really good jobs.”

How will history judge “Earth Shot” vis à vis “Moon Shot” of the 1960s? Moon Shot succeeded in dramatic fashion – what will be the fate of Earth Shot?

At first, the similarities are patently obvious. Both Presidents were Democrats. President Kennedy waited for four long months after his inauguration to make the Moon Shot announcement, while President Biden threw down the gauntlet three months after inauguration.  Both goals were announced early in a decade that was a multiple of four (significant because of the Presidential election cycle). Both goals had an end-of-decade deadline. Without question, both goals depended on advancements in science and technology. And in both cases, there were many voices, erudite and otherwise, saying either that it could not be done or was the wrong goal or was a waste of resources (the benefits of Moon Shot are debated to this day: was the effort to launch humans into space, at its heart, more an enormously expensive public-relations exercise than a consequential scientific undertaking?).

There are, of course, dissimilarities on the surface. Not the least of which is age. President Kennedy was the youngest elected President at age 43. History buffs will recall that Theodore Roosevelt was 42 when he succeeded William McKinley after his assassination. At 78, President Biden is our oldest President, elected or otherwise (77 days older at inauguration than President Reagan’s last day in office). President Kennedy was himself assassinated on November 22, 1963 and did not see Moon Shot become a reality. Many consider saving our planet a more existential goal than a “nice-to-have” achievement like traveling to the moon – but at the time space exploits were equated with military might.

As one digs deeper, however, the differences could not be more stark. If declaration of “Celestial Shots” were an Olympic sport, what would be the degree of difficulty of Earth Shot compared to Moon Shot? Without minimizing NASA’s achievements in the 1960s, I would argue that Earth Shot is a super-hard goal. Where will 50% GHG reduction come from? The simple answer is that we must electrify everything we possibly can and get the necessary electricity from renewable sources.

As I explained in my previous blog “The Incumbent Mirage,” disruption curves often follow an X-shape as shown in the image. In our case, renewable energy will be so plentiful and inexpensive that it will not only spur economic activity but create possibilities of which we can only dream today.

We know very well where the reduction by 2030 will not come from: heavy duty transportation (especially shipping and airplanes), cement, certain types of manufacturing, steel making, some fraction of building stock with fossil fuel furnaces, etc. The full decarbonization of these sectors will have to occur in the 2030s and in many cases rely on yet-to-be discovered innovations. This means that the sectors that we know how to decarbonize must undergo deep decarbonization in the 2020s: electricity, light and medium-duty transportation, buildings, electrification of industry, and at least some progress in AFOLU (Agriculture, Forestry and Land Use) by methods such as regenerative farming, as shown by the green sectors in the figure.

The most important difference between Earth Shot and Moon Shot, however, is the involvement of everyone. Yes, everyone, including the curmudgeons, luddites, climate deniers and contrarians! In the case of Moon Shot, NASA bore the brunt of the burden while the average citizen cheered (and paid taxes). Earth Shot will be completely different!  If Earth Shot is to be successful, the day-to-day life of the common person will change profoundly. Life will never look the same! The houses we live in, the vehicles we drive, the way we heat and cool our buildings, the way we cook, what we eat, our awareness of carbon… these are just some of the profound changes we will and must experience. This required behavior change is what makes Earth Shot super-hard and a tougher nut to crack than Moon Shot.

Like Moon Shot, we’d like Earth Shot to be a smashing success! Unlike Moon Shot, we’d like President Biden to see the fruits of the initiative that he is starting, even if he were to serve only one term. But for this to work, we must all pitch in, put our shoulder to the wheel and begin to decarbonize our own lives. And then turn our attention to our neighbors, businesses, municipal facilities, schools, houses of worship, companies and on and on until we achieve our decarbonization goals. So, here’s a call to action: become “carbon literate,” use our Carbon Tracker to understand your own carbon impact and learn from the Carbon Tracker how to begin your own personal Earth Shot of 50% GHG reduction by 2030!

A wistful parting thought: we know for a fact that President Kennedy read a serialized version of “Silent Spring” by Rachel Carlson in the New Yorker in the summer of 1962 prior to its publication in book form in August. What if President Kennedy had announced an Earth Shot to combat climate change in a second term? What a different and better world we’d be living in!